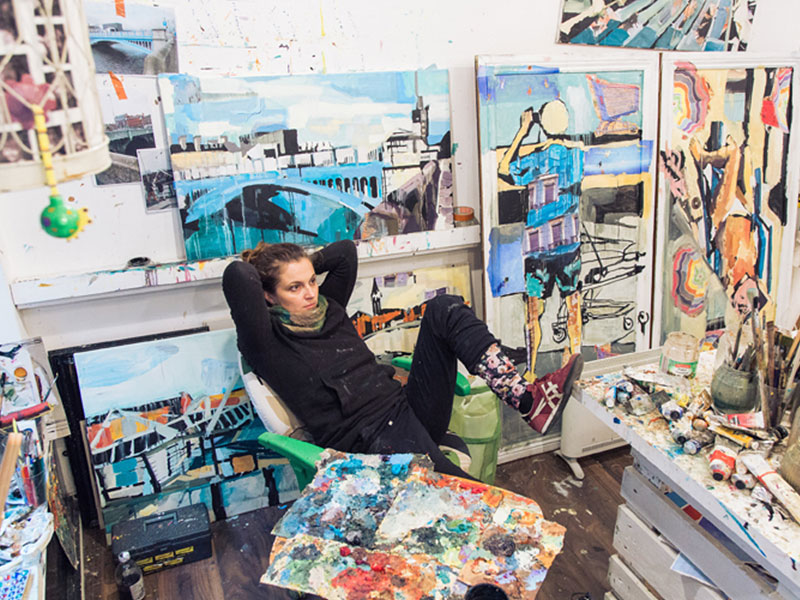 Kevin is a full time artist, illustrator and mural painter based in Dublin. Kevin came back to art in his mid-thirties after a long break. Since 2011 he has had five solo exhibitions in Dublin. He has taken part in numerous group shows, live-painting events and festivals.
Kevin is a volunteer at The Icon Factory artist-based charity in Temple Bar. They help support local artists through commission free exhibition space and help promote Irish culture through art and education. He has worked facilitating creative workshops and mural painting events with schools, youth groups and drug rehabilitation centres.
Kevin is a big fan of tribal and psychedelic art, character-based pieces and works in digital illustration, pen and ink and acrylic paint. However large scale mural painting is his passion. He has painted many public and private commission murals in Dublin and around Ireland. He has taken part in many street-art festivals including The All City Jam, Evolve Urban Art Jam, Electric Picnic Artlot, the Longford Cruthú Art Festival, Waterford Walls International Street Art Festival and Memphis Paint. 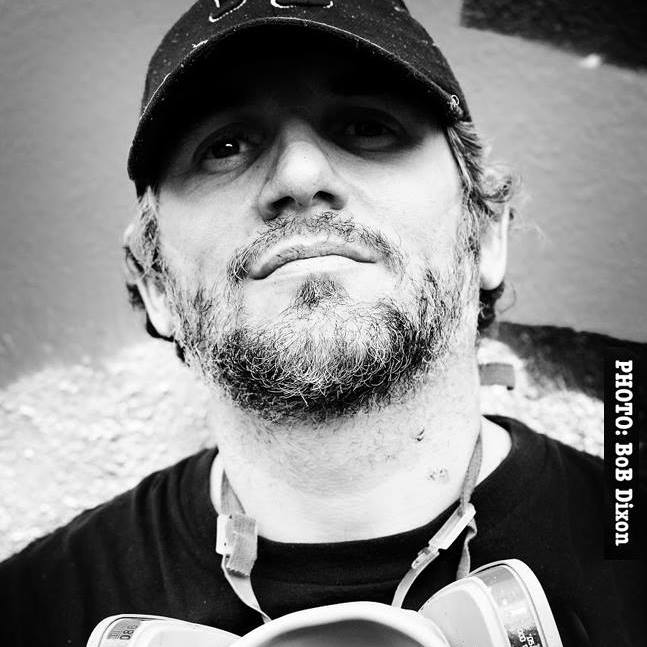 Pawel is an artist and a designer, born in Poland and currently works in Dublin. He graduated from National Secondary Art School in Nowy Wisnicz and has a Masters of Museum Exhibition and Art Sacral -P.A.T in Krakow. He exhibited his paintings in several European countries including Latvia, Ireland, Poland and England.
Pawel presented his work at the Hunt Museum during the Polish Art Festival September 2016.
His portrait of Paul Brady has been printed on the side of a building in Temple Bar, The Icon Factory, which is located in the historical centre of Dublin.
Pawel strives to portray a diverse world, bringing in themes of tolerance, loneliness, love and longing, often in a humorous and subtle way. One of his favourite motifs is that of a woman, often of an unrealistically large size. Painted in many different ways, she is a symbol of fertility and maternity. 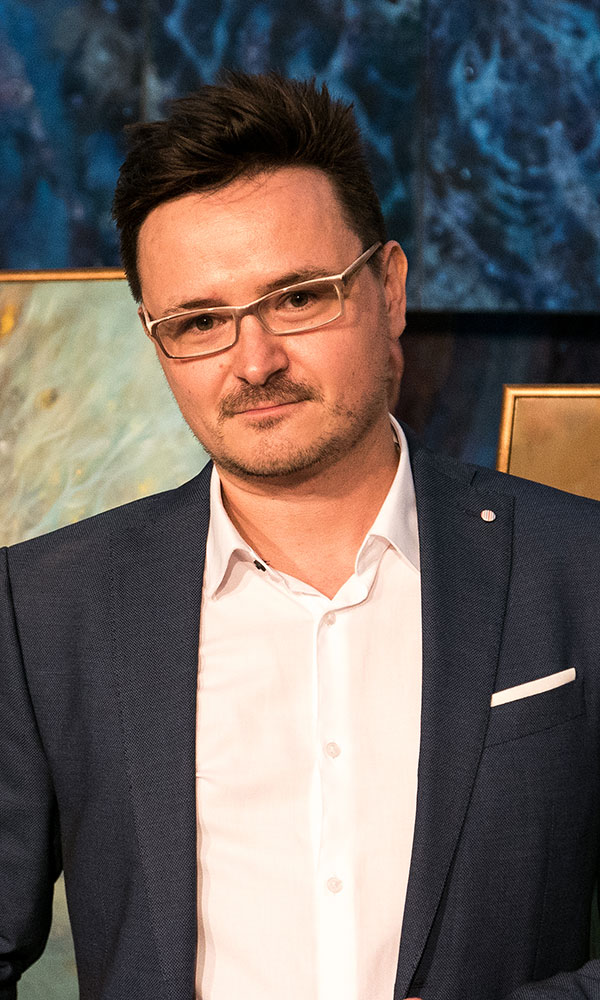 Mel (1978) was raised in a bohemian environment, her parents encouraged her to adopt a broad and somewhat anti-establishment outlook on life. She relished the opportunities such parenting afforded her, exposure to diverse people, alternative ideas and the constant dialogue around artistic, political and social issues. All of these experiences have served her intellectual inquiry, and artistic development. From an early age she had a keen interest in pop art and animation, using these styles to articulate the world around her. A natural explorer and very curious by nature, Mel gets her artistic inspiration from her extensive travels. Traversing the World, she meets and connects with people from different ethnicities, in various environments both urban and rural, researching their culture and heritage. Searching for the differences between the people she meets, she was struck by the striking similarities, connecting points and the shared kindred spirits she encountered. These unexpected bindings and unlikely affinities, that she found tying together various ethnicities and cultures, stimulates her artistic practice and continues to keep her socially engaged. Mel’s paintings celebrate these memorable encounters in joyous colour, reflecting the pleasure of connections she finds, and painting with an energy that echoes the vibrancy of these connections.
Artist Statement:
“In the early development of my work I began with photography, I was drawn to capture images of the everyday, documenting conventional lives moving through their various spaces, always seeking to formulate a quirky snapshot of life. Over time, this pursuit was not fulfilling my creative hunger, I moved forward to other creative outlets, these included working with acrylics, oils, pastels, watercolours, applying these to canvas, wood, paper, and other materials. In the 1960’s and early 70’s, street art, graffiti, and the combination of psychedelic images and design in both fashion and art were prolific, these were a strong grounding on which I based my early development. The vivid colours of those eras, the strong lines and deep contrasts that first opened my artistic eyes, all find echoes in my work today. In later life I began to expand my focus to include other areas of art and design, I was inspired by the posters and prints of artists such as Andy Warhol, the abstract designs of Picasso, and the imagination used in the creation of works by Salvador Dali & Frida Kahlo. All of these artists have left a strong influence on me. At present, I am committed to expanding my scope and very open to exploring new avenues to articulate through my painting and find new expression to represent the often contradictory ways in which our world is formed.” 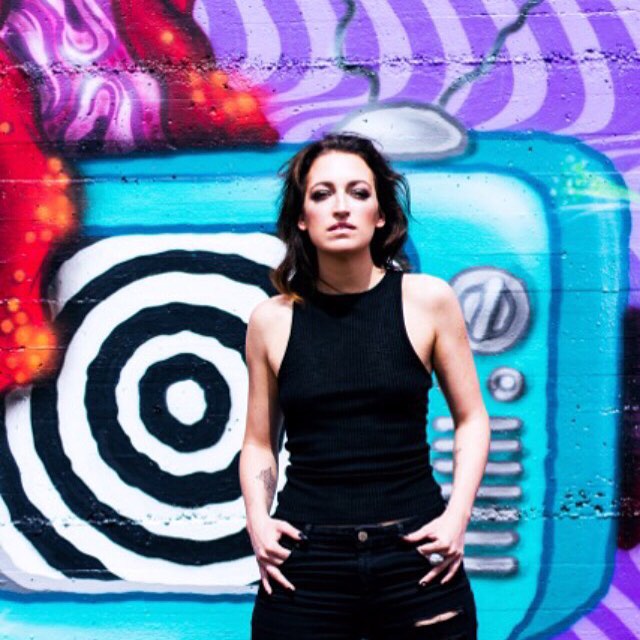 Iwona is a Polish artist living in Dublin for the last ten years. Iwona studied ceramics at the Art Czestochowa High School. In 2001 Iwona graduated with a Master’s Degree from the Pedagogical University of Czestochowa, Poland specialising in painting. In Poland she was a member of artistic group “Naciapane” Splash, acive between 2005 -2010. Iwona is regular resident at Aga Szot Studio beside the Icon Factory in Temple Bar. In 2017 she open three solo exhibitions in Dublin “Horizontotally”, “Configurations”, “Wet paint” and she has taken part in many group shows. In 2018 she took part in Polska Eire Festival as one of the artist exhibiting in Art Cafe in Dublin.
Artist Statement:
“I am a Polish artist based in Ireland with a degree from Faculty of Art, The Jan Dlugosz University in Czestochowa. My work explores the relationship between the colour, abstract art, action painting and expressionism. I have always been fascinated by children’s art, calligraphy, Aboriginal art and African art from which also these artistic directions draw. I would point out three artists from my home country who have had an influence on my art: Jacek Malczewski, Piotr Potworowski and Jerzy Nowosielski. In my artistic practice I use bold colours, scratched, rusty surfaces and outlines of the silhouettes of people, boats, trees and birds. Often I also paint non-figurative artworks which can be described as colourful mindscapes. I am working in acrylic paints and also clay as a ceramist.”

You can see her artworks 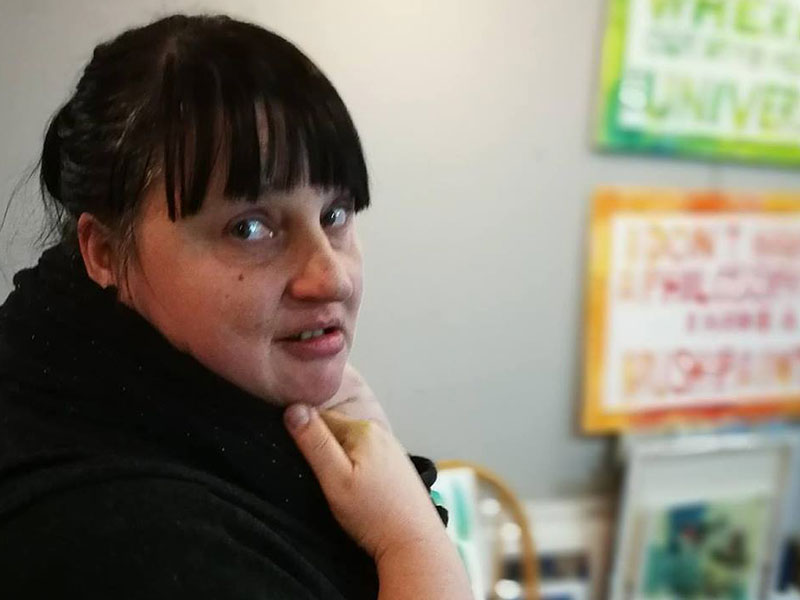 Iulian was born and raised in Piatra Neamt, a small city in the heart of the Carpathian Mountains from Romanian. He is currently living and working as an artist for the past 7 years in Dublin City. As main influence, nature, is inspiring him in drawings and paintings. As a technique of choice, he using the palate knifes on Fabrriano paper to immortalize different aspect of the beauty that nature offers for free to anyone at any stage of our life.
Artist Statement:
“We live in a world that seems to have too many things and we forgot the basic connection that we have with the nature around us. I started my project thinking about what are the values that we as a society had created, or should I say the fake values. I did not know where to look or what to acknowledge as being “pure” anymore, because I am getting lost in the obsession to gain more physical and technological things/objects in this meaningless reason of materialism. I start to critically look for answers that came up after I study the traditional and contemporary paintings of artists like: Anselm Kiefer, Gerhard Richter, Gustave Courbet, Nicolae Grigorescu and many more. I appropriated their art using Photoshop to make digital collages, transferred them on canvas material. Doing so I realized that I have to come back to basics, in the way that this process was too complicated and time-consuming. I was not satisfied with the results and I was feeling that I want to “break out” of these processes that was holding me back from painting without any kind of limitations. I figured out that I need to simplify everything. To go back to basics, using just Fabiano paper, brushes and painting knives. Rapidly I felt like I found my way back to nature, having no restriction, creating that “pure beauty” using nature as it is, the most powerful teacher. My goal was to “rediscover” my real values, during this journey that got me back to my natural way of being. The outcome of my project is to present and offer to the viewer my homage towards the nature around us, that we keep forgetting that “she” is the only reason for our existence on this planet.” 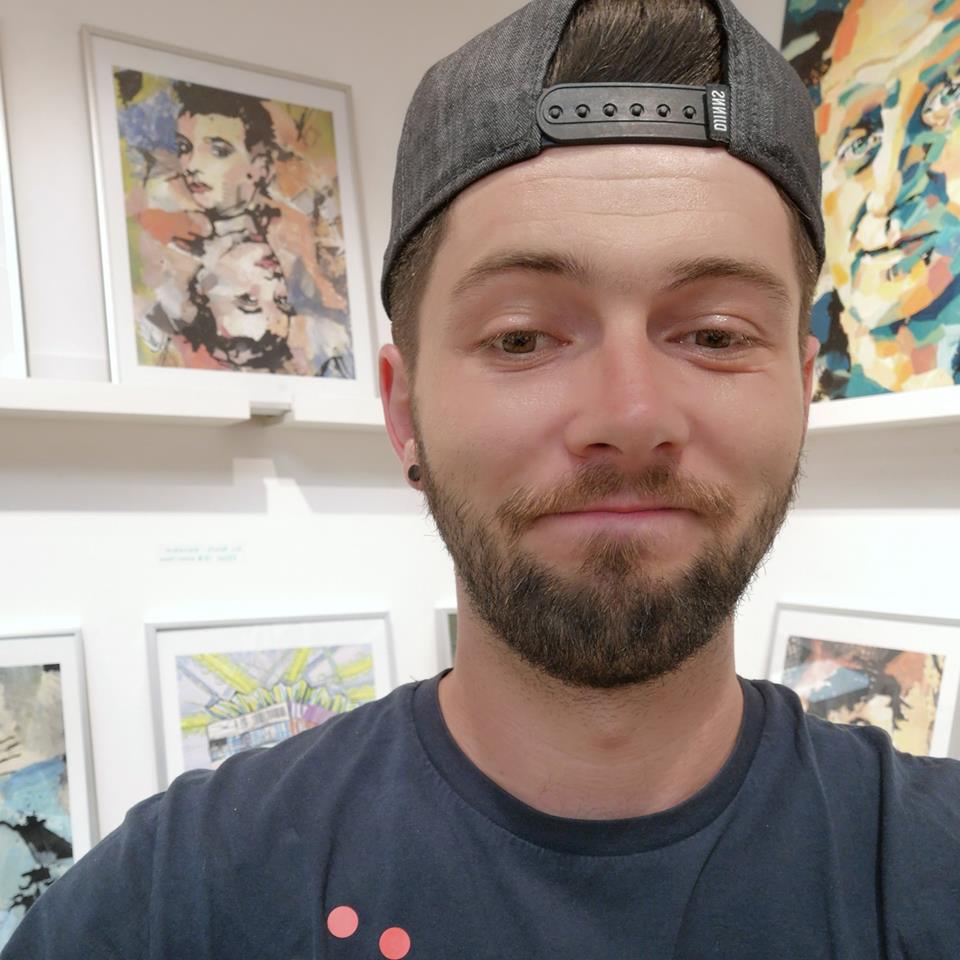 Katarzyna was born in Poland in Oswiecim. She moved to Ireland in 2009 and it was here that she started to draw and paint again after not doing so for many years. In 2013 she picked up her pencil again then was pen and ink and now she is trying focus on developing her oil painting skills. Katarzyna is a self-taught artist and her work is primarily the result of her need to create and express herself, it is both a challenge and an outlet. She is still experimenting and searching for her own artistic voice, particularly the voice that can describe her inner need to capture something other than just paint. Katarzyna’s favourite painters are- Rembrandt, Titian, Odd Nerdrum, Vincent Desiderio. 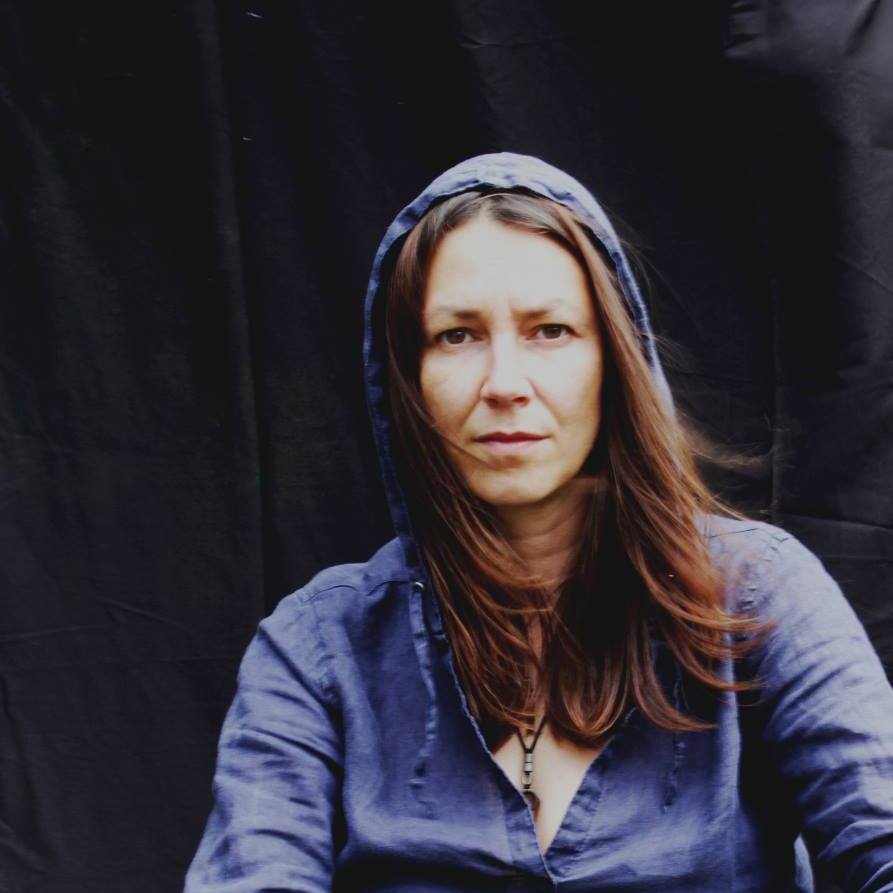 Yola is a composer, director, singer, pianist, performer, author of the workshops. She holds M.A. in Music and Composition. She worked with the artistic milieu of Lodz, Poland and many cultural institutions of the city as a musical instructor, composer and arranger, leading vocal and instrumental groups. She successfully participated in competitions and festivals all over Poland receiving many prestigious awards. Yola collaborated with Theatre Kalambur in Wrocław, Theatre Rampa in Warsaw, Berlin Club So36, Theatre Studyjny in Łódź (she received a First Price for the music composition for “Nie-boska Komedia” directed by Zdzisław Jaskuła), Theatre Nowy of K. Dejmek.

Yola composed music to the film about Tadeusz Różewicz and Eugeniusz Geta Stankiewicz “Zabawy przyjemne i pożyteczne” directed by Lambrosa Ziotasa and produced by City of Wrocław and magazine Odra 2006.

Yola has been awarded numerous times for her work and in 2015 she has received a very prestigious award from Ministry of Culture and National Heritage of the Republic of Poland for her lifetime achievements. 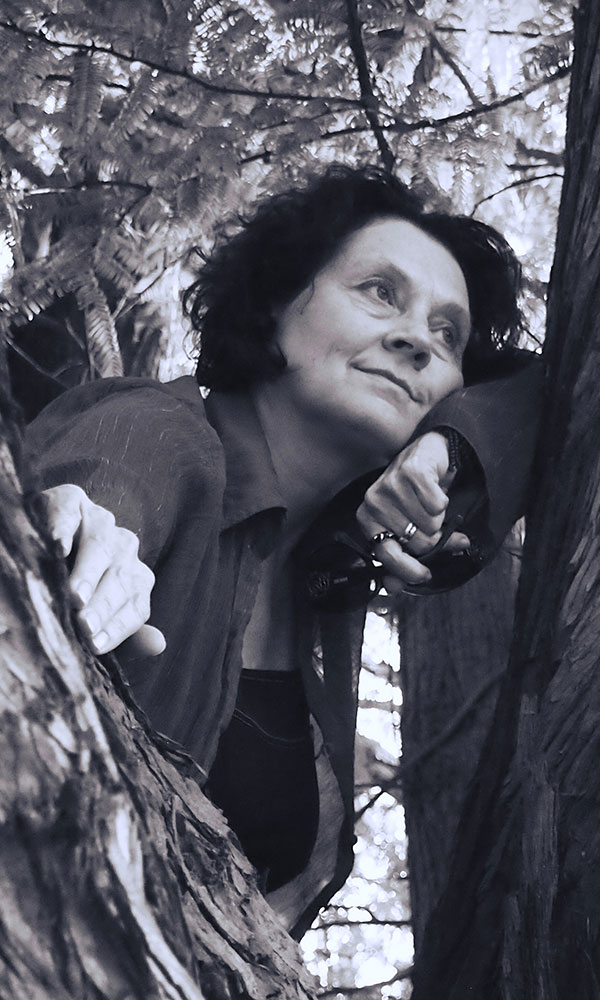 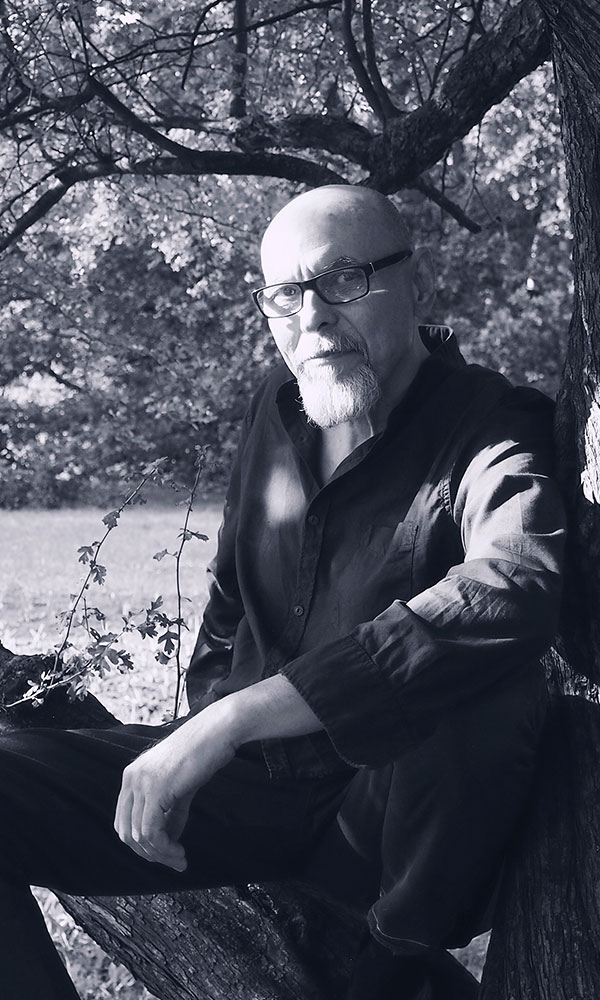